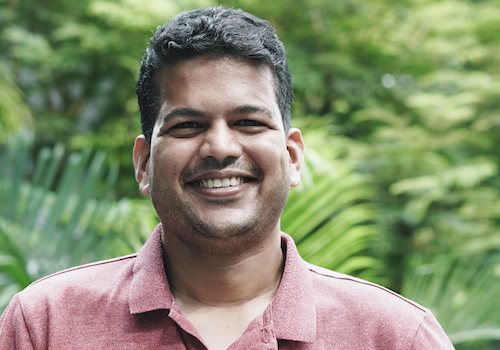 Christine Devlin, our Head of Content, sat down with our Chief Product Officer, Aakash Dharmadhikari, to discuss his background as a serial entrepreneur, his transition from developer to product manager, and the four key product pillars that unite GoJek and Jiva

Christine Devlin: Aakash, thanks for taking the time to chat. Let’s begin with a bit of your background. You’ve been in startups now for over a decade — where’d it all begin?

Aakash Dharmadhikari: I began my startup career at a company called Burrp!, which was an early player in the food discovery scene in India — a bit like Yelp. The startup scene in India was in its infancy at the time, so moving from a corporate to a startup was less common than it is today.

C: Would it be fair to say that move was a little more risky? If so, what factors outweighed the risk for you?

A: I suppose it was riskier than staying at an established corporate, but risk didn’t play into my decision then. To be honest, risk hasn’t guided any of my career decisions. For that job in particular, it was the people. I remember coming away eager to work with the people who had interviewed me. You could tell they were no-nonsense, execution-oriented, and excited about what they were working on.

C: Looking back, what was the biggest change that you experienced after moving from a corporate to a startup?

A: The aspect of startup work that surprised me the most was the degree to which you have to work and think cross-functionally. When I started, I had focused solely on software development and the skills that job entails. Burrp! was my first time working with product managers, designers, content strategists, and others. I grew so much during that time due in large part to the exposure to other skill sets, functions, perspectives and priorities.

C: You then went on to co-found C42 Consulting with Niranjan, Jiva’s current CTO. Tell me about that.

A: C42 was a group of very eccentric, very smart people, some of whom have joined us at Jiva. We took on developer-centric consulting projects and built tools that are used globally today. But we had zero business sense and often went too deep on the build side. For example, we spent 6 months geeking out on Rubymonk, an e-learning platform for developers that saw 50,000 users on its first day. At the end of 6 months, we had perfected the code base but had no monetisation strategy. We decided that building products and consulting in parallel was difficult, so we handed the consulting business over to our employees and tried our hand at building our own app.

C: Was that app an extension of Rubymonk or a different product entirely?

It was a matrimony app for the Indian market, actually. Though there is demand for dating apps like Tinder, we felt there was an opportunity to serve the much larger traditional matrimony space. You can think about the delivery model as monster.com vs. LinkedIn, where a matrimony service is like the former and involves recruitment, a resume and interviews. We hypothesized that Matrimony, like LinkedIn, values the shared connections more than resumes.

We had no operational background at the time and ended up playing around with business models; was it a white label site, a data collection play, a freemium product? We pivoted about half a dozen times in a year before tabling it.

C: From an e-learning platform for developers to a matrimony app! How did you end up at GoJek?

A: After the experiment with the matrimony app, I returned to consulting for startups. Many of my friends were engineers at companies like Flipkart. At the time, there was a big shift from single, monolithic architectures to more agile, modern stacks in an effort to drive scale, deeper personalisation and better efficiency. My team and I took on those projects and eventually partnered with Sequoia, which gave us access to their portfolio of companies. It was through Sequoia that we began working with, and were ultimately aqui-hired by, GoJek.

C: At what point in this journey did you transition from engineering to product?

A: I had been working cross-functionally for a while, but didn’t officially label it until GoJek. I joined as an engineer at a time when we faced a high rate of churn in requirements. This made the engineering team appear inefficient, though the problem was the direction we were given. If you give incorrect blueprints to a construction team, and you have to ask them to demolish and rebuild the structure halfway through, are they inefficient? No, the issue is the architect.

I kept telling the CEO that he needed to rethink product management. After about 3 months he said, “Fine, if you know so much about it, you run it”. I said “Ok, sure” and that was that.

So, we are focusing now on delivery of the digital product. We are asking ourselves, which features, design principles, elements of the user experience and engagement strategies will deliver exceptional, one-of-a-kind digital experiences to this user base? Prioritisation comes from, and evolves in response to, the answers to these questions.

C: I think it’s natural to draw parallels between the two platforms as both operate logistics networks and rely on a hybrid human-technology model, but the end user and engagement strategies differ meaningfully. Talk me through the specifics of how Jiva and GoJek rely on a similar user model.

A: No question, Jiva’s end user and engagement strategies are unique. But below all that, both platforms rely on four key pillars. They are:

These four product pillars form the bedrock of Jiva and many other products. With a strong foundation, we have the opportunity to launch other services, add features, learn from the user, bring on partners and create a true ecosystem for all stakeholders.

C: That’s fascinating. It sounds like you have serious ambitions to build a rural superapp…

C: One final question — From your perspective, what is unique and exciting about the product challenge at Jiva?

A: Product managers love two things: figuring out the current rules of the game and how to manipulate those rules to optimise their outcomes. At Jiva, the rules of the game are still being mapped, let alone optimised. And although there is a fair amount of “low hanging fruit” in rural agriculture, the complexity of the domain and its users mean operationalising those are not as easy. This complexity, coupled with the sheer impact it represents, is what makes product at Jiva so exciting.

Interested in applying for a role at Jiva? Check out our careers HQ, website or email us directly at careers@jiva.ag